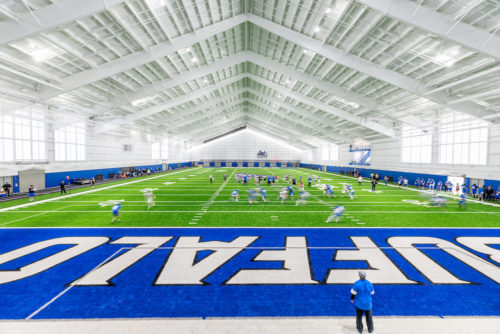 The UB Athletics, Murchie Family Fieldhouse on the North Campus.

The UB Foundation played a pivotal role in the creation of the Murchie Family Fieldhouse, including advancing funds that allowed construction to proceed earlier than anticipated, and administering donor gifts for the facility. A version of this article originally appeared on UBNow.

A ‘game-changer’ for UB

The longtime dream of an on-campus fieldhouse at UB will soon be a reality. The 92,000-square-foot indoor practice facility will be located just beyond the north end zone of UB Stadium on the North Campus.

“This is a tremendous game-changer,” noted Mark Alnutt, UB’s director of athletics. “Alumni Arena is busting at the seams and this gives us another opportunity to spread the wealth and have a facility where, when those winters come about and teams need to get a practice in, they don’t have to commute to another indoor facility somewhere else. This is something that benefits the entire Division of Athletics, which includes athletics and recreation.”

The Murchie Family Fieldhouse will not only house a full-size football field, but also feature 6,000 feet of rubber track for sprint practice, as well as long/triple jump and pole vault pits. It also will have motorized suspended softball hitting tunnels.

The facility will house university events, expanded student recreation programming and intramurals. With the new fieldhouse, UB is among 10 other Mid-American Conference schools that have such a facility in the 12-member conference.

“The University at Buffalo has a strong tradition of outstanding student-athletes who are successful both in the classroom and on the field,” said President Satish K. Tripathi. “The intent of UB’s vision to create a 21st-century living and learning campus is to ensure that all of our students — whether they are aspiring artists, architects, athletes, researchers or physicians — have the same opportunities to be successful academically and in all of their extracurricular endeavors.

“This field house will be an asset that benefits not only our student-athletes, but our entire university community.”

Our investments–including the endowment that we manage for the betterment of UB–have grown consistently through the years. This growth helps ensure a predictable revenue stream that supports scholarships, endowed chairs and faculty research.

The Gift Stewardship Committee helps attract the private support that is crucial in recruiting top faculty and providing world-class facilities.