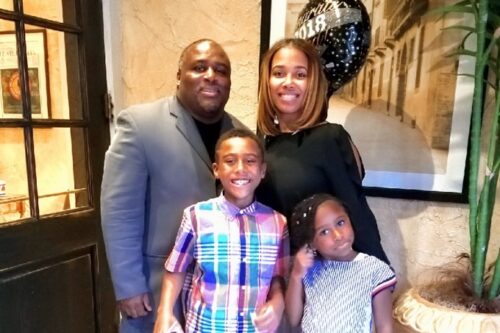 Charice Thompson, winner of the Drs. Henry J. and Bonita R. Durand Scholarship, with her husband and children.

The UB Foundation administers endowments that support numerous scholarships, including the Durand Scholarship, which encourages and supports graduates of programs housed within UB’s Cora P. Maloney Center (CPMC). A version of this article originally appeared on UBNow.

A local entrepreneur and nontraditional student driven to be a role model for her two young children is the inaugural winner of the Drs. Henry J. and Bonita R. Durand Scholarship, an award given to a student facing financial obstacles standing in the way of a graduate degree.

Charice Thompson, a graduate student in UB’s Information and Library Sciences program, left her studies at UB in 1994 to financially support herself. She intended to return to obtain her undergraduate degree, but while working full time as a cosmetologist, her business grew exponentially.

Thompson loved servicing clients and expressing her creativity through hairstyling so much that she opened her own salon in 1999. She then married in 2000 and had her first child in 2008.

“Like most non-traditional students, I questioned whether I would be able to manage college and all of my other responsibilities,” says Thompson. “However, after having my daughter in 2011, I came to realize that I wanted to be the example for my children that I did not have.

“While my mother attended college, she did not finish and expresses her regret until this day. I did not want to live my life with regrets.”

That commitment led Thompson to return to UB in 2015; she graduated with a bachelor’s degree in political science in 2018. She then applied to the UB School of Law and was wait-listed.

“Initially, I was disappointed,” Thompson says. “But being wait-listed afforded me the opportunity to explore other interests, something I had not done in almost 20 years. That is how I came to apply to the ILS program.

“Although it has been incredibly difficult trying to juggle running a business and raising two children while working and going to school full time, I am determined to finish what I started,” says Thompson, who is married to Jermaine Thompson and owns Sittin Pretty Hair Salon, 59 Kenmore Ave., near UB’s South Campus. The two have a son, Baron, and daughter, Emerald.

“Also, I want to show my children that with determination and perseverance they can do whatever they set their mind to.”

Thompson received the Durand Scholarship, established by the late UB administrator and GSE faculty member Henry Durand and his wife, Bonita, to encourage and support graduates of programs housed within UB’s Cora P. Maloney Center (CPMC). The scholarship provides financial support to matriculated students in UB’s Graduate School of Education and the Department of Urban and Regional Planning in the School of Architecture and Planning.

The award assists students who encounter obstacles that can hinder progression toward earning a degree. The recipient must be an alumnus of any of the following UB undergraduate programs: Student Support Services, Daniel Acker Scholars, Collegiate Science and Technology Entry (CSTEP), the Arthur O. Eve Educational Opportunity Program (EOP) or the Ronald E. McNair Program. Preference is given to graduate students who demonstrate they are overcoming socioeconomic barriers in order to pursue graduate studies at UB.

The best word to describe Thompson, a CSTEP pre-law participant as an undergraduate, is “focused,” according to Shanna Crump-Owens, UB CSTEP director and a member of the scholarship selection committee.

“She was so persistent to come back to UB to pursue a college education,” says Crump-Owens. “She left UB for more than a decade, started a business and then had a family.

“Charice wanted to be an example for her children. It’s challenging to tell our kids to attend college if we haven’t done it ourselves.”

“She certainly has been a role model for others while striving to be her best,” she says.

Crump-Owens also worked with Henry Durand when he was her supervisor while he served as executive director of the Cora P. Maloney Center. A clinical associate professor in the GSE, Durand guided four divisions and 11 programs of CPMC, which provide academic services to ensure higher education access and opportunities to 3,500 undergraduate students, most of whom are minority students.

“Dr. Durand cared deeply about students,” Crump-Owens says. “He was a force and consistently strong advocate for equity and inclusion as it related to talented students on campus, particularly students of color and those who were economically disadvantaged.  This scholarship exemplifies the inspirational legacy and indelible imprint that Dr. Durand left on this campus on students and those of us who worked with him.”

Durand’s wife, Bonita, was chief of staff to the president and secretary to the College Council at SUNY Buffalo State. She served five college presidents from 1996 until her retirement in 2018, the same year her husband died.

Bonnie Durand was a charter member of the board of the Buffalo Niagara Economic Development Corporation, and served as a commissioner on the Niagara Frontier Transportation Authority and as a board member of the Community Foundation for Greater Buffalo.

Our investments–including the endowment that we manage for the betterment of UB–have grown consistently through the years. This growth helps ensure a predictable revenue stream that supports scholarships, endowed chairs and faculty research.

The Gift Stewardship Committee helps attract the private support that is crucial in recruiting top faculty and providing world-class facilities.